As many of you have probably heard, the NSA recently released their reverse engineering tool Ghidra to the public. Ghidra promises a host of features, including: cross-platform support (Windows, Mac, Linux), disassembly, assembly, decompilation, etc. I’m not a reverse engineer by trade, but it’s something that I enjoy as a hobby.

I’ve been wanting to test out Ghidra and I’ve also had some questions about getting into reverse engineering, so I decided to kill two birds with one stone and create an Intro to Reversing post using Ghidra. There are a lot of reverse engineering challenges available on the Internet (See Link Farm).I chose a challenge off of CrackMes:easy_reverse.For the reversing, we’ll use the Kali VM that we setup here.

To start off with, download and extract Ghidra. Ghidra is written in Java, so make sure you have OpenJDK 11 installed on your system
java --version
If you don’t have Java installed, you can install it using
apt install default-jdk
Depending on which distribution of Linux you are using, the default version of Java may be less than OpenJDK 11. Refer to your distribution’s documentation on how to obtain a newer version if you aren’t running Kali.

Now that you have Ghidra, you need to download the challenge easy_reverse and unzip (Password is crackmes.one).

Before we begin, let’s go over some basics of the tools that we will be using: Ghidra and EDB (Evan’s Debugger). We won’t get into EDB until Part 2, but it we’ll go ahead and discuss it here.

Ghidra
Like I mentioned earlier, Ghidra is a reversing tool developed by the NSA. Specifically, Ghidra offers disassembly and decompilation. Disassemblers are useful for taking the machine code from an executable and translating it into assembly language. For a quick intro into architecture and assembly language, check here. Once we have access to the assembly code, we can begin the process of reversing. A disassembler offers us a way to view the assembly code, make adjustments (called patching), and generally examine the functionality of an application. Disassemblers can provide other functionality as well. Additional functionality can include things like scripting and decompilation. A decompiler is similar to a disassembler, but it translates into a higher level language, like c. Assembly language is very basic, requires many more lines of code, and can be pretty difficult to read. A higher level language, like c, can be much easier to read.

EDB
Evan’s Debugger (EDB) is a debugger included in the default Kali installation. By translating a binary application’s machine code into assembly code, debuggers provide similar functionality to a disassembler. The key difference between a debugger and a disassembler is code execution. A debugger allows you to run through an application’s code in a controlled way. Of course, debuggers have uses outside of reversing i.e. debugging. Why use one over the other? One reason is that reversing tools that offer disassembly often include additional functionality to aid in reversing (see above). Additionally, it’s often beneficial to examine code without running (especially true when examining malware). We’ll be using both Ghidra and EDB in this tutorial. Ghidra’s decompilation makes things easier to decipher and EDB allows us to watch information as the application executes.

Let’s dig in. Change into the Ghidra directory and run the ghidraRun script.
cd ghidra
./ghidraRun

It will take ghidra a few moments to load up. Once it does, you’ll be presented with two windows: the project windows and the help window.In the project window, create a new project by clicking File->New Project. Name it crack_me (We’ll use this project for all of the parts of the tutorial). Once, the project has been created,open the code viewer by clicking the dragon icon in the Tool Chest.

To start off with, let’s see what this file does.Use the terminal to run rev50_linux64-bit by typing:

We see a similiar result when we add an argument.
./rev50_linux64-bit password

Go back to the Ghidra code viewer and you will see a host of information. 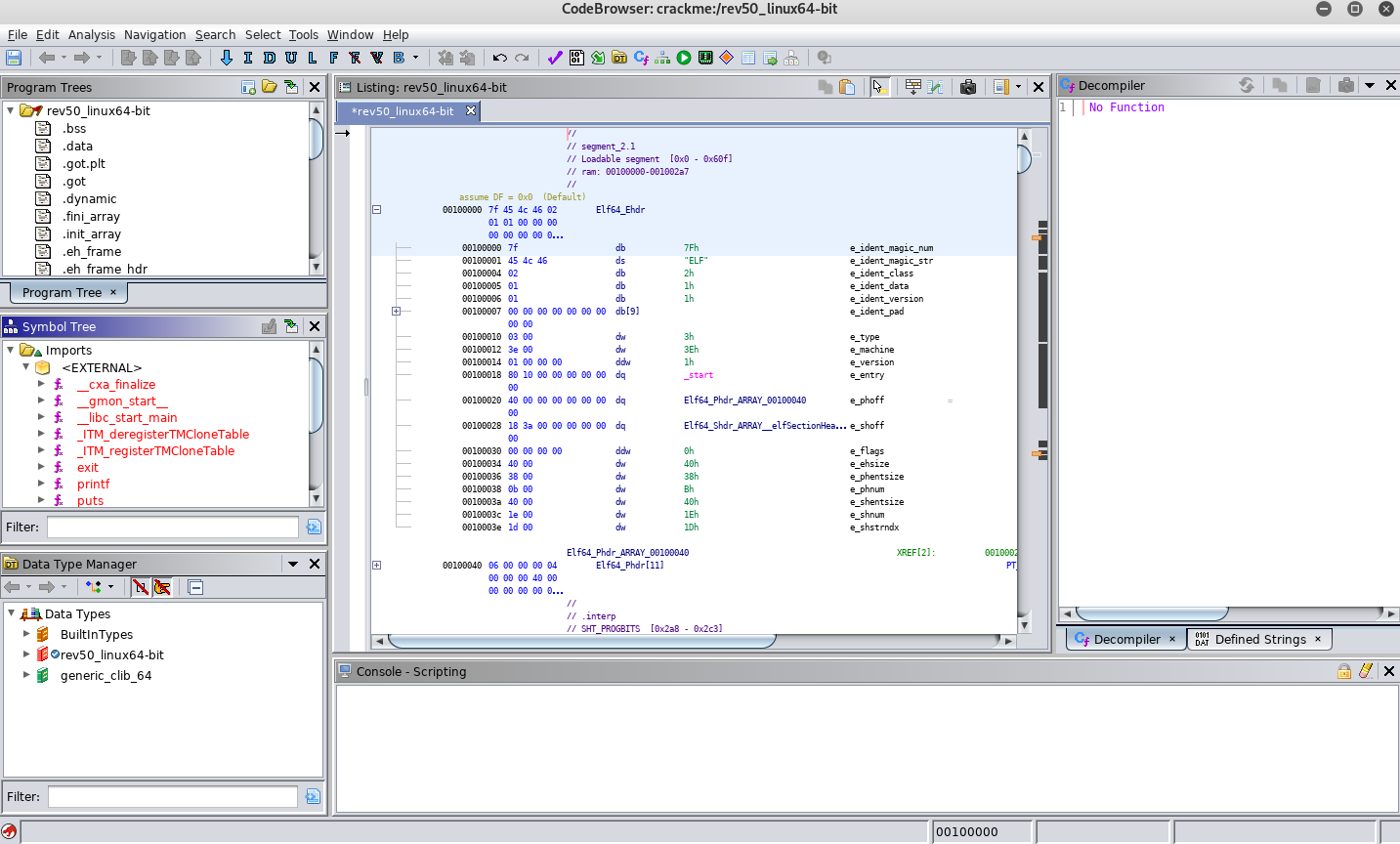 When I first started reversing, I only knew about debuggers and had little knowledge of reversing. My initial strategy involved single stepping (running one instruction at a time) through the code and evaluating as I went (Do Not Do This). Even though I had a decent understanding of assembly language, this was a long and arduous process for even the smallest applications. Over time I learned that some initial analysis could help guide me.

To start our analysis, let’s try to determine some of the functionality of the application by examining the application’s imports. To do so, look at the Symbols window on the left side of the codeviewer. To find the imports, drill down into Imports->External. 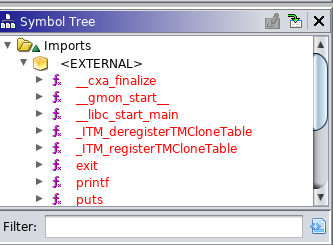 Take note of the following imports: 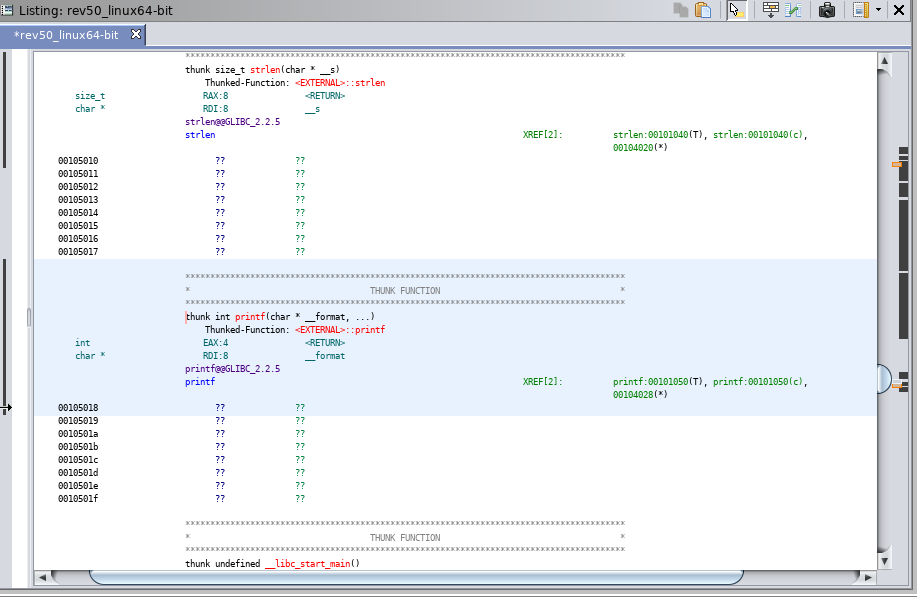 While interesting, we ideally want to find where printf is used during execution. You can jump to places that printf is referenced by double clicking one of the references to the right of XREF (in green). Do this and continue doing it until you find a location in code where printf is used (Hint: watch the decompile window until you see something similar to below). You can go back to the previous screen by using the back button (blue left arrow at the top left of the screen). 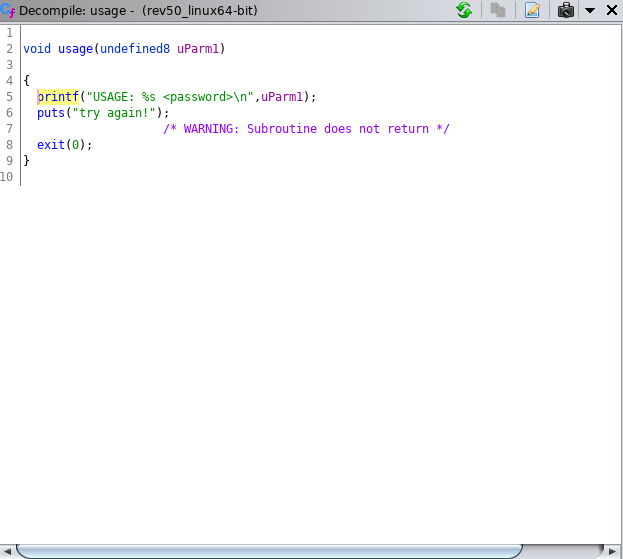 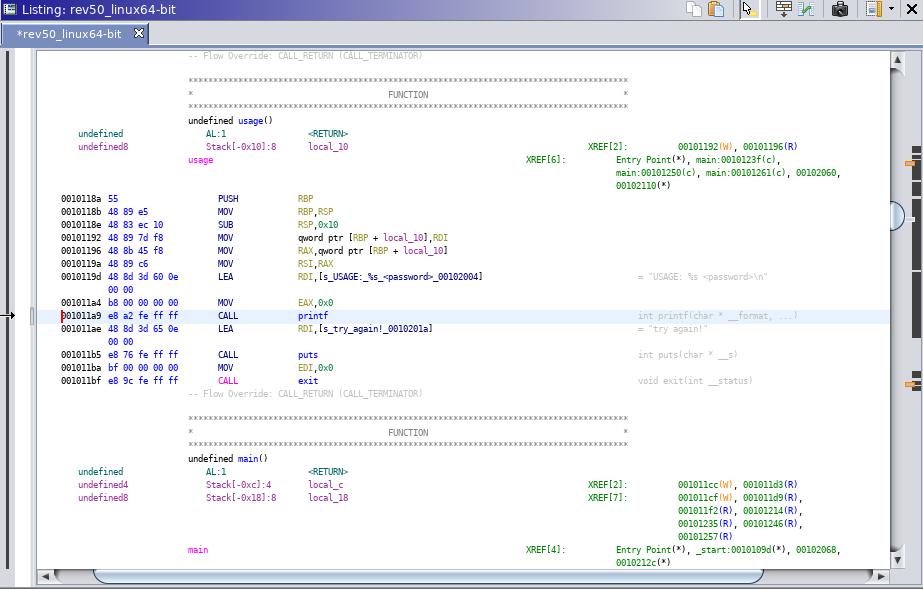 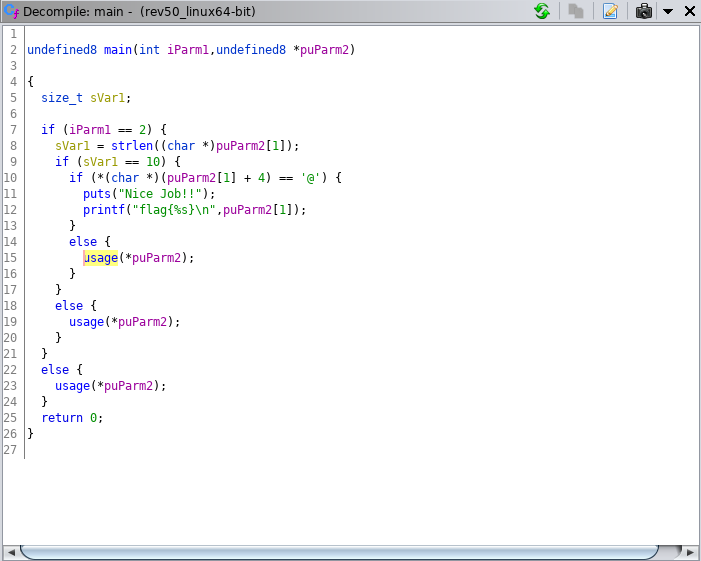 Now that we have the code that calls the usage function. Let’s examine the code.

Look at the first few lines of code before the line with
puts("Nice Job!");

Now, we could dig through the code to determine exactly what iParm1 and puParm2 represent, but we can also try a bit of deductive reasoning. Given that we know the application requires an argument or it prints the usage statement, we can hypothesis that iParm1 represents our input in some way. For puParm2, we could hypothesis that this represents our argument since some checks are done against it before the Nice Job message is printed. Given our two hypotheses, we can continue on to make an educated guess that our application checks that we have an argument
if (iParm1 == 2)
that has a length of 10
if (iVar1 == 10):
and has an @ symbol in the 5th position.
if (*(char *)(puParm2\[1] + 4) == '@' {

Using our logic from above, we can make an educated guess that the program will show us the “Nice Job” message if we supply an argument that is 10 characters long and has an @ symbol in the 5th position (ie. aaaa@aaaaa). 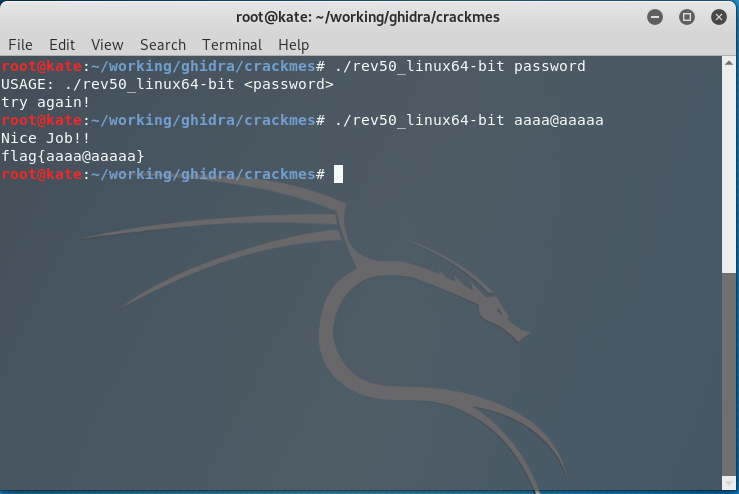 Success! A perceptive reader will note that bbbb@bbbbb or any combination of characters that has the @ symbol in the 5th position and is 10 characters long will work.

Congratulations on completing your first challenge! For this exercise, we were able to determine everything we needed with relative ease using Ghidra. In Part 2, we’ll start with Ghidra and pivot into EDB for our solution.